You gotta be kidding me! I know that gossip magazines like InTouch eventually aren’t the most reliable resource but when I got to read that Carrie, Samantha & Co. are planned to get “new faces” I was in a shock. I’m a true SATC lover although Sarah Jessica Parker is by far not a …classic beauty… but Carrie without that face is like Samantha being replaced by someone like Blake Lively. Can you imagine Blake Lively aka Serena Van der Woodsen playing Samantha in the planned third part of the SATC movies?! (Please note that this is intended as a rhetorical question!). That’s just the most ridiculous thing I could have read. Beside the fact that Blake Lively instantly pisses me off as she is definitely not Chanel-approved for any kind of commercials (Karl, what have you done?!) nor outstanding, she is above all a bad actress. And if anyone thinks the opposite, then you either don’t understand English or you don’t get that mumbling instead of talking in proper sentences isn’t one of the new conditions to become a famous actress. I loved Kim Catrall as Samantha. She is authentic, she is simply amazing. Choosing Blake Lively is one of the biggest miscasts ever. At least choose someone who’s worthy to represent Samantha in her earlier days but not someone who’s most of the time playing some unnecessary bitch from the Upper East Side who doesn’t know what she wants and who seems to fall in love with the hugest losers all the time.
And what about Miranda played by Emma Roberts? Roberts? Beside from her famous, talented aunt … for what is she famous for? A guest-performance in a Disney series? Being a mermaid?
And Carrie? Carrie will probably find herself again in the body of Elizabeth Olsen. She once said that she wants to be different from her sisters but in fact the only thing that distinguishes her from her siblings is her face (which honestly is not that duck-face-meets-alien-reminding).
Oh and who is Selena Gomez? Another real-life-mickey mouse arising from Disney Channel and meant to play Charlotte in her younger stages in life. And as InTouch has perfectly informed me, she’s the insane girl being in a relationship with that Bieber-creature. Are you serious?
Above all the most disturbing thing is not their (dis-?)ability to act in general and their probable talent. It might be that Miss Gomez or Miss Olsen the 3rd are pretty much good in their job as Disneygirls (whatever) but I personally see the biggest problem in their ability to transform the right characteristics of Carrie & Co. . With other words: I’m doubting their ability to play each role “the right way”. How can a 17 year old transform the character that was determined to be a women in her 30s-50s with “the normal problems” that come with them? That’s the most unrealistic thing. Plus: Who’s interested in Carrie’s, Samantha’s, Charlotte’s or Miranda’s “problems” when they were as young as we are? I think there are already ENOUGH series (like the one Lively was originally employed for) in which the teen/twen-problems are represented at its best. And at its dumbest. So why the hell using one of the best series ever existing and trying to produce some bad stuff out of it?
I really hope that all of this is just a bad rumour and an even worse joke by Candice Bushnell and her frankness to other actors. You just can’t do this to me! :( 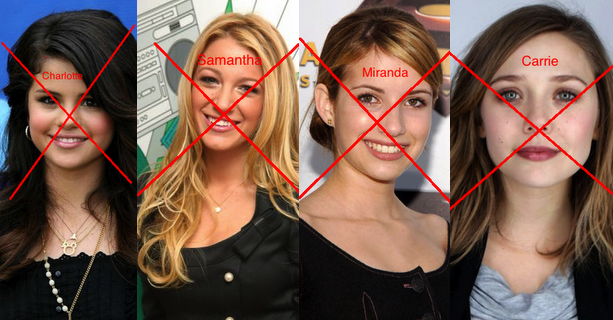