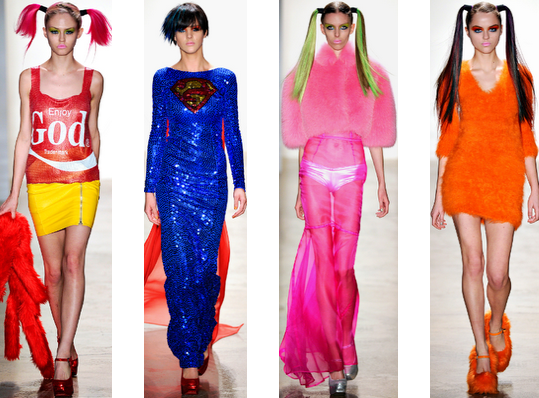 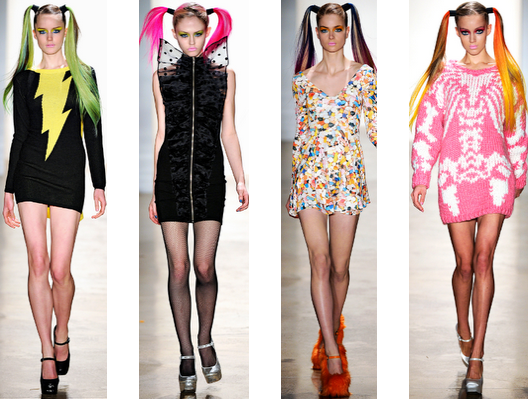 picturecredit: style.com
I don’t know whether the title is exactly hitting the point I want to make but when I had a look on the latest collection Jeremy Scott just released at New York Fashionweek, my first thought was probably the mixture of “What The Fuck”, “Oh My God” and a huge laugh. There is definitely none else who can release such a complete transformation of ones own craziness at a fashionweek and still gets the fashionworld’s full attention (including my little head which hopefully counts to this world someday ;)).
No doubt about the fact that the whole collection reminds of a super-hyper-overdosis of a bad-taste party, but still it caught me with its complete tastelessness and made me come to the conclusion that such crazy shows are needed between all the seriousness of other brilliant heads.
The “Enjoy God”-shirts and dresses, which are the obvious mock of the coke-branding (or probably Scott loves coke so much that he needed to include that!?), the superman-like dress and the flashes tearing the dresses with transparency apart all have their own, crazy character. It’s the get together of different branding-mocks, the orange cookiemonster, candies and absolute contradictory combinations, which probably most of us would not consider as being a serious part of the latest purchases in the closet.
The hair-do of the female models reminds me of my absolute favourite series when I was a little girl: Pippi Longstocking. I guess this reinforces the girlyness and with the different dyes he meanwhile sets a contrast to that image.
With prints like “milk kills” he additionally provokes the well-known campaigns of drinking milk in collaboration with various celebrities.
Giving the male-parts of this collection also a little try, there might be the expression of Scott’s dream-job as a child: Astronaut. Or at least something between an astronaut and Hulk.
Looking over this whole collection I think of my room when I was a little girl… a lot of glitter, fluffy somethings, a pot of craziness, pink and other shrill colours. A great collection, which is as rich in contrasts as it should exist among all the more serious collections.
(And no I personally would never go out with some black dress and pink, fluffy details at its end or something else from that collection beside the flash-dresses…) 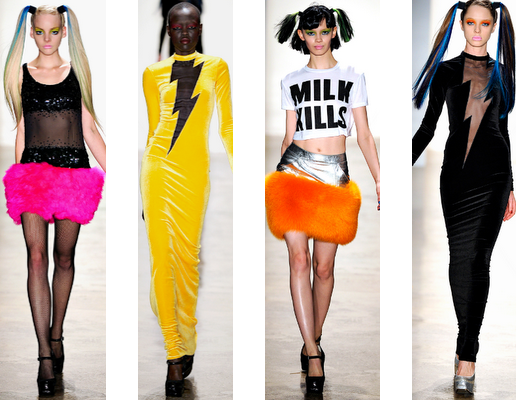 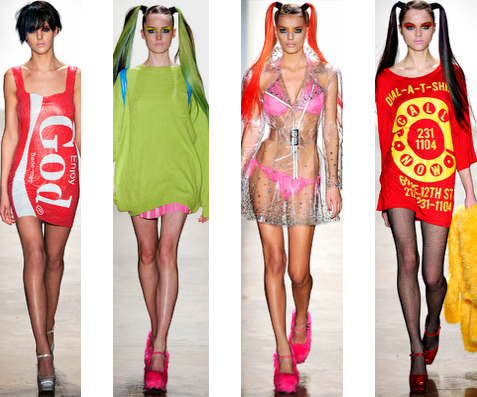 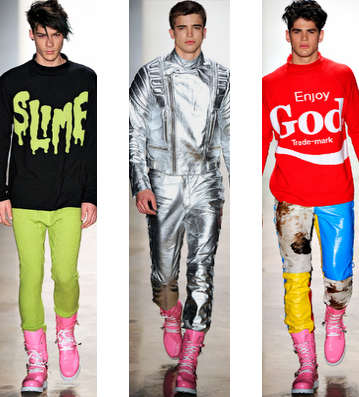